Posted on August 18, 2013 by John | Comments Off on Better Broadband – Broadband contract has been awarded

The broadband contract has been awarded this week 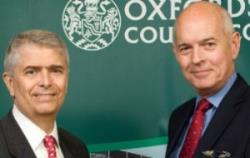 The Better Broadband for Oxfordshire team is excited to announce that the contract has been agreed and awarded. The successful company is BT.

Negotiations were successful in exceeding the target 90% superfast (>24Mbps) coverage across the county, while meeting the minimum 2 Mbps coverage for 100% of homes and businesses in Oxfordshire. 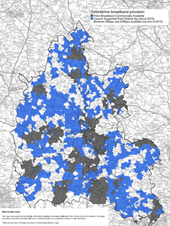 Now that the contract has been awarded we understand that the first thing people are going to want to know is which areas will be covered by the rollout. We have been working through the contract detail and have developed a preliminary map of new coverage which is now on our website. While this is subject to change following an ‘on the ground’ survey assessment, it can provide an indication of what we currently understand the new coverage to be.

The population in the new coverage area (marked blue on the map) is estimated to be approximately 150,000 people. It is important to note the Council’s approach to the contract negotiation. The contract was agreed on a terms of ‘maximum countywide coverage’ and the areas were modelled accordingly. The Council did not ‘pick and choose’ areas to direct the investment to, preferring to utilise the available funding to extend coverage to as many homes and businesses as possible. If you would like to discuss this with us please arrange to do so via the bbchampions@oxfordshire.gov.uk email.

Timetable to rollout is on track

After an initial planning process which takes place from now until the end of the year, works will commence for phase 1 in January of 2014. The work will be spread over 6 phases with roll out completed by December 2015.

Key components of the contract

The Broadband for Oxfordshire programme will bring fibre broadband to an additional 64,000+ homes and businesses across the county over the next 2½ years, delivering speeds of up to 80Mbps.
According to Ofcom, around 1 in 10 premises in Oxfordshire currently receive less than 2Mbps. Virtually every household and business with these slow speeds will see significant improvements to their internet access, with a minimum of 2Mbps – enough to watch BBC iPlayer – and many experiencing significantly faster speeds.

The total broadband investment from this contract in Oxfordshire is £25M. By investing £10m to enable rural areas to be upgraded, the County Council has triggered an additional investment from BT (£11m) and BDUK (£4m) that otherwise would not have happened. For every £10 spent by the Council, the county has received an additional £15 of investment.

The County Council will continue to work with BDUK and BT to pursue additional funding to enable the programme to go further so more and more people have access to superfast broadband.

As always, thank you to all the broadband champions for your continued support. We appreciate that this has been a complex process. The County Council has endeavoured at every opportunity to complete things as quickly as possible for Oxfordshire and will continue to do so until all the work is delivered.

United Kingdom
This entry was posted in Uncategorized. Bookmark the permalink.